I happy to announce that I have a poem in the most recent issue of Third Coast, the literary magazine housed at Western Michigan University. It’s called “Retaliation,” and it’s a poem that I’ve been particularly excited about, because of how it channels a whole bunch of my personal obsessions into a single work. Perhaps you’ll indulge me if I elaborate for a little bit. (That, and since the poem is in print I feel bad about not having anything to link to.)

First, there’s the subject matter. “Retaliation” is addressed to Todd Bertuzzi, a former hockey player who was the assailant in one of the most brazen instances of in-game violence that I can remember. On March 8, 2004, in the third period of lopsided game between the Vancouver Canucks and the Colorado Avalanche, Bertuzzi grabbed Colorado center Steve Moore from behind, punched him in the back of the head, and drove him head-first onto the ice, breaking several of Moore’s neck vertebrae. Moore would never play hockey again, and Bertuzzi faced criminal charges for his actions.

The incident has stuck with ever since, largely because I saw a lot of replays of Bertuzzi’s sucker punch while watching SportsCenter; the footage became by version of the Zapruder film. But I was also haunted by the reactions of the broadcasters and the crowd. If you watch the footage of the incident, the moment that Bertuzzi punches Moore you’ll hear the play-by-play announcer’s voice perk up excitedly and the crowd begin to cheer. It takes good while for everyone involved to realize the extent of Moore’s injuries, and then the mood shifts drastically; the whole game, as it were, crashes into a wall.

That brings me to the thematic content of the poem, which revolves around the concept of the magic circle. “Magic circle” is a term appropriated from Johan Huizinga’s book Homo Ludens: A Study of the Play-Element in Culture to describe the constructed world in which a game takes place, where the rules of the everyday world are set aside and in-game actions are, by and large, metaphorical. While this notion of the magic circle goes back to the work of game designers Eric Zimmerman, Frank Lantz, and Katie Salen, I first became aware of it from an episode of the YouTube series Errant Signal discussing a video game called, appropriately, The Magic Circle.

Now, everyone agrees that, if games exist within a magic circle, the boundary between the game world and the everyday world is very porous. But Bertuzzi’s actions did not merely represent a crossing of that boundary; it came close to erasing that boundary completely. All play came to a halt, spectators became eyewitnesses, and both men would enter a years-long legal process as a direct result. This was no longer a game; it was a current event and a moral crisis.

Lastly, we come to the form. I’d had this basic idea for a poem—tying the Bertuzzi incident to the magic circle concept—stuck in my head for a good while, but I could never get it down on paper in a way that remotely satisfied me. That is, until I decided to show my students “Lake Sonnet” by Anne Marie Rooney (which you can read here) as an example of how poets play with the sonnet form. In this poem, and several other by Rooney, she follows a Petrarchan rhyme scheme but only uses “identical rhymes” (i.e., rhyming words with themselves or with homophones). It works especially well in “Lake Sonnet,” as the repetition of end words highlights the speaker’s monotonous sexual encounters: “I,” “men,” “our,” “breaks”.

I had personally done imitation exercises based on Rooney’s poems in the past, but it was only after teaching it that I realized that this structure—an identically rhymed sonnet—might be a good fit for the poem I’d been trying to write. Hearing the same words over and over again could be used to trap the poem in a particular moment, and there’s something wonderfully “circular” about all this repetition. A few hours later I had a draft; a few months worth of tweaks later and I had the poem in its current shape.

At time of writing there is no link to purchase the latest issue of Third Coast, but hopefully that will change in the near future. In the meantime, you can purchase back issues of Third Coast via their website.

I’m very happy to have another poem in Cumberland River Review! Their current issue features my piece entitled “On a Small Farm in Waterbury, VT,” which is inspired by a photograph by Sasha Arutyunova that was featured in The National, the Amtrak in-train magazine. The photograph was part of a larger series documenting the Vermonter route between New York City and Waterbury, all of which are worth checking out. (Surprisingly, The National is a really good magazine; give it a read if you’re ever on Amtrak.)

Thanks again to the editorial staff at CRR for selecting my work for inclusion!

You can read “On a Small Farm in Waterbury, VT” by clicking here, and you can read my previous poem in CRR, “Overland Express Arriving at Helena, Mont.,” by clicking here. If you would like to see Arutyunova’s series of photographs that I mentioned above, you find them on her website (the one that inspired my poem is the 12th in the series).

I’m very pleased to announce that two poems of mine have been published in the most recent issue of The McNeese Review: “Men Who Stand Still Are Broken” and “Luis Martinetti”. The former poem was inspired by a line someone had written on a column in the 42nd Street–Port Authority Bus Terminal subway station, and I think it’s the only poem I’ve written where the organizing principle is having a fixed number of words per line. The latter is another installment in my series of ekphrastic poems about the Edison Studios catalog of short films (which I have mentioned here and here). In this case, it’s inspired by some footage of an acrobat going through his routine. I’m rather proud of both these pieces, so I guess finding a market for them helps validate my taste in my own work.

This publication is very exciting for a couple of reasons. First, it turns out that I’m in the same issue with Jim Daniels, a faculty member at my alma mater, Carnegie Mellon University. (I never had a class with him, but I did get to speak with him a handful of times.) Second, this is the first publication that I’m actually getting paid for, so I can finally cross that goal off my list.

You can order a copy of this issue of The McNeese Review through the magazine’s website. If you’d like to see the film that inspired “Luis Martinetti” (i.e., the film Luis Martinetti), you can watch it below:

I’m happy to announce that one of my poems, “Overland Express Arriving at Helena, Mont.,” has just been published in Issue 8-1 of the Cumberland River Review, the literary magazine affiliated with Trevecca Nazarene University in Nashville, Tennessee.

This poem is part of loose series that I’ve been writing in response to the films of Edison Studios, or at least the ones that you can find on the Library of Congress’s YouTube channel. Overland Express Arriving at Helena, Mont. depicts exactly what its title suggests: a train pulling into a station in Big Sky Country. I was especially drawn to the film’s intense contrast in values, with the pure white sky looming over, and then giving way to, the dark commotion of the platform below.

You can read my poem about this film at the link above.

If you are curious about the other poems in this series, I have had a poem inspired by The Execution of Mary, Queen of Scots published in Tar River Poetry (under the title “Edison Studios”) and have another one, based on Luis Martinetti, forthcoming in The McNeese Review.

Special thanks to Graham Hillard and the rest of the team at CRR for including my work in their magazine. I have another poem, unrelated to all these Edison Studios pieces, forthcoming in CRR later this year.

I’m pleased to announce that I have a poem in the inaugural issue of the Maryland Literary Review. It’s called “We Sleep However We Can,” and it’s an ekphrastic poem inspired by Fernard Léger’s Animated Landscape, a 1921 painting in the collection of the Baltimore Museum of Art. I lived in Baltimore for almost three years while pursuing my MFA, so it’s nice to have a poem published that can rep for the Old Line State.

Special thanks and good luck wishes go to Nathan Leslie, the editor of the Maryland Literary Review. May your new journal find its audience!

You can read “We Sleep However We Can” by clicking here, and you can see the BMA’s listing for Léger’s painting here.

I’m excited to announce that one of my poems, “Qualia,” is now available to read over at Amsterdam Quarterly, an online literary magazine based in the Netherlands. I’m really happy to see this particular poem get a home; it’s the first one in a long time where I just let myself cut loose with the sound and the subject.

Special thanks to editor Bryan Monte for selecting the poem and for keeping all the contributors up-to-date on the build-up to publication.

You can read “Qualia” at this link, and be sure to check out the other contributors’ works as well! 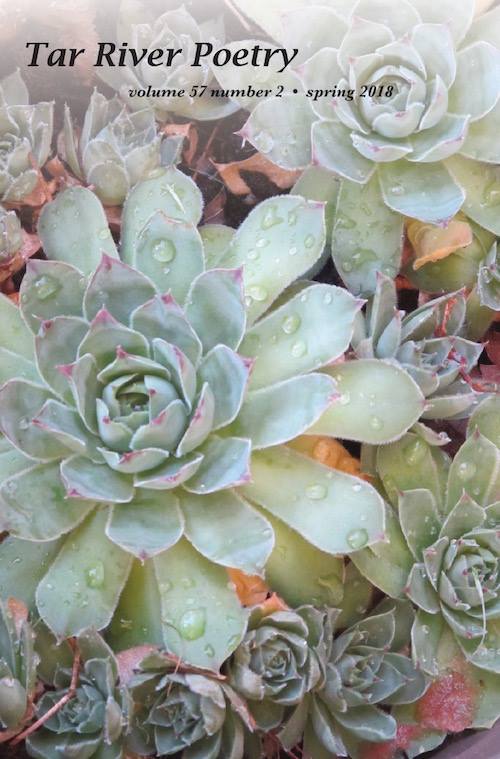 One of my own poems, “Edison Studios,” has recently been published in the latest issue of Tar River Poetry, the literary magazine of East Carolina University.

Thanks to the editors for selecting the piece. You can support Tar River Poetry by subscribing to the magazine here.

The newest issue of Glassworks, a literary magazine out of Rowan University, is now available at this link. The editors were kind enough to select one of my poems, “Torpor,” to appear in this issue. Go ahead and read it, along with everyone else’s work!